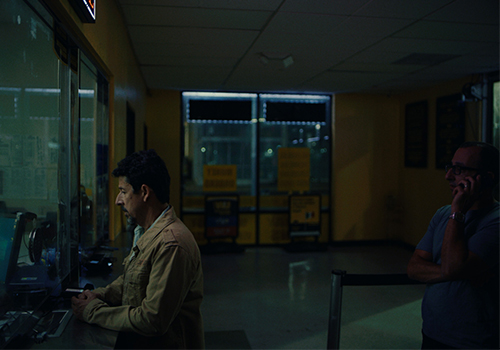 Motivation of the jury:
A very effective portray of the strife of immigrants, closely tied to the theme of contemporary urban life. The film shows a rare empathetic view of modern delivery workers, carefully meshing the impersonal quality of digitized customer interactions with the intimately personal phone calls with the protagonist’s mother halfway across the world. It communicates well the uprootedness and transposed quality of immigrant life, being physically in one place but socially in another, and cleverly contrasts crossing the city (the impersonal local context) with navigating intimate social ties overseas (the remote personal life).

A Pakistani immigrant juggles demanding ride share customers while talking on the phone to his mother in Pakistan.

She is a Los Angeles based writer and director. She was raised in Kuwait by Muslim, Pakistani and Sri Lankan parents who were migrant workers. She immigrated to the US in 2013.
She wrote and directed the Disney short film, AMERICAN EID, for Season 1 of the NAACP Image Awards nominated series Disney Launchpad. The film is now streaming on Disney+. Her films have premiered at festivals like SXSW and Clermont-Ferrand International Short Film Festival and shortlisted for BAFTA Film Awards. She was nominated for the Young Director Award 2019 at Cannes Lions.
Aqsa was selected by Riz Ahmed’s Left Handed Films and Pillars Fund as one of their 2022 Pillars Artist Fellow and was selected as Directing Mentorship Fellow for Ryan Murphy's HALF Initiative. In addition to her narrative work, Aqsa also directs commercials and branded films. She is currently developing her first feature and TV projects.

He is the son of writers from an off-the-map place. Now a Los Angeles based writer/director. DGA Nominated for Best Commercial Direction 2014. Listed in AdWeek as one of the top 20 Content Creators of 2016.
Directed a short film for Dove (Dove Real Beauty Sketches) which within one month of releasing accumulated over 150 million views on youtube and officially was titled the most viewed commercial of all time.
His films have premiered at festivals like SXSW and Santa Barbara International Film Festival.
His work has been featured by The New York Times, The Today Show, CNN, TIME, Forbes, ABC News, and many others. In commercials: John has partnered with top agencies like BBDO, Grey, Wieden+Kennedy, 72 and Sunny, Ogilvy, and others. He has helmed campaigns for clients like Apple, Coca-Cola, Samsung, Dove, Guinness, Google, Philips, and more.