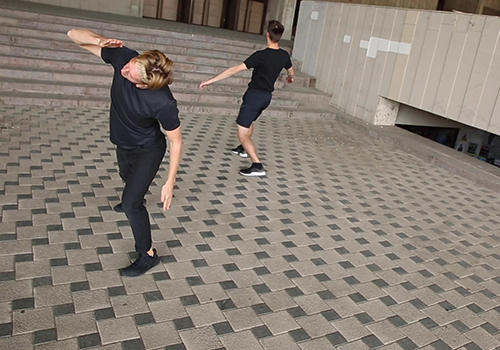 What Shall We Do With These Buildings?

[The film will be screened as ITALIAN PREMIERE in presence on November 29th - 9.00 pm @Museo Spazio Pubblico, via Curiel 13/d, Bologna]

What Shall We Do With These Buildings? is a documentary-dance film which explores the legacy of Soviet architecture in Kharkiv, Ukraine. The film was shot in September 2021, at a time when the prospect of a full-scale invasion from Russia seemed remote, but the ghost of its former rule remained written in concrete across the cityscape. The film platforms a divisive and open conversation about the city’s Soviet buildings: What should be done with them? Should they be preserved, destroyed, repurposed? What power do they hold over the way people think and interact with their environment?
Interwoven within this patchwork of opinion is another kind of exploration. Dance runs through the film in playful counterpoint, providing another language to articulate the ways in which buildings move bodies.
Since the invasion, the film serves as a time capsule - a snapshot of an independent, hopeful Ukraine trying to find its feet, at a time when that independence has never been more threatened. It captures tensions embodied in social space right before the city descended into war. We hope it can provide an insight into how Kharkiv was before the invasion; how much it has lost and stands to lose. We’ve also now committed to using the film as a fundraising tool for humanitarian efforts on the ground.

He is a movement and theatre director from London. Previously he studied English Literature at Cambridge University, and he graduated from L'École Internationale de Théâtre Jacques Lecoq this summer. Since then, he has taught at Kharkiv School of Architecture, where he taught movement and dynamic sculpture to first year students and completed a residency in collaboration with the Literature Museum. He works internationally, having toured the east coast of the U.S., and brought theatre pieces to Norway and to the cellar of the National Theatre of Iceland. At the moment, he works with Akimbo Theatre Company and helps run an annual lantern parade in the town of Tonnerre in Burgundy. In addition, he is very passionate about therapeutic dance practises and previously spent a year with East London Dance working as an assistant movement therapist for people with disabilities.