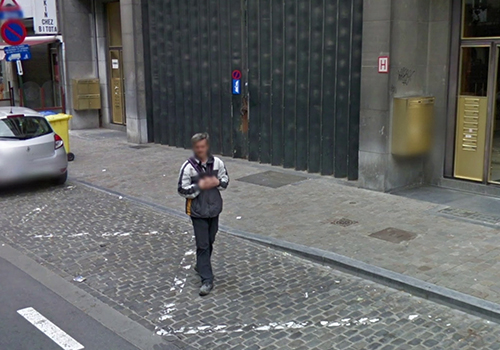 Motivation of the jury:
The film uses an innovative format: juxtaposition of the google map street views in the city of Brussels with voices of interviewees with the aim to reflect on the state of the city and everyday life of immigrant people. Leaving much to the imagination, the topic of discussion around the role of work for a decent life is dealt with a mature approach: it presents an original, cohesive yet diverse narrative around precarious work and its relationship to urban life for migrants and refugees, with a careful and effective selection of dialogue and succession of interviews.

The street “Diksmuidelaan” is a street in Brussels where day laborers are looking for a job for one day. Gathered in small groups, they wait for hours until a white van picks them up. They get dropped off at a construction site or field. Employers pay small salaries and no social security is provided.
​With personal their testimonies Waiting Working Hours wants to give a voice to clandestine workers. Digital images from the “Diksmuidelaan”, made with recordings from Google Streetview, are mixed with the voices from these workers. Together they form a constructed dialogue about labor and economics, in a multitude of languages. The immobile world of Google Streetview is like the standstill that the workers experience when they are waiting for hours.
​Together with the workers, Waiting Working Hours examines and questions their current situation and their dreams for the future.

He is a filmmaker based in Brussels. He holds a Master in Audiovisual Arts at KASK, Ghent. Ben is interested in labour, communality and resistance. His films start from documentary but are influenced by fiction and experimental cinema. Ben is a founding member of dagvorm_cinema, a collective that runs a tiny cinema and shared post-production spaces. His short films have been presented and won prizes at WTFF, Encounters, BAFF, Beursschouwburg and Visite.