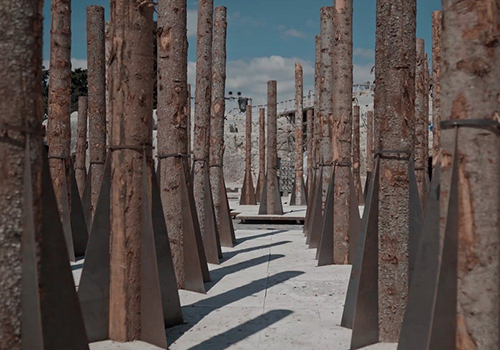 In one single night, in October 2018, rain and wind tore down 14 million trees, transforming a lush mountain landscape in northern Italy into an apocalyptic ground, with environmental consequences that will affect life in the area for many decades to come. In Carnia, one of the worst hit areas, 400 of those trunks were retrieved, and from there travelled to Syracuse, opposite end of Italy, where on the Greek theatre stage they gained a last role, as mute witnesses of both tragedies.
The film tells their journey as if through their own eyes, along 1500 Km and across a variety of landscapes, colours and sounds.

Stefano Santamato, born in ‘89, graduated in Architecture from the Polytechnic of Milan in 2014 and later he trained at the Cfp Bauer in Milan and at the Locarno Documentary School as a documentary filmmaker. He works for the video production company from Milan The Blink FIsh and develops specific research on architecture storytelling through audiovisuals. He has realized videos and short films in Italy and abroad on the work of architects and designers such as Luigi Caccia Dominioni, Peter Aldington, Alan Kitching, Patrick Bouchain, Duilio Forte, Bruno Vaerini, Corrado Levi and Stefano Boeri.