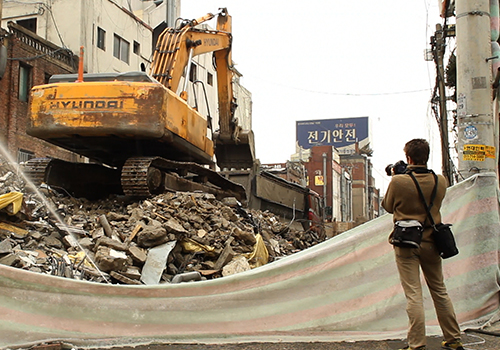 Motivation of the jury:
em>The Urban Suite tracks the process of destruction and reconstruction within the residential district of Gyonamdong, Seoul. It focuses on the passage of time through the lens of place and the effects that the change within the district has on the inhabitants of Gyonamdong. Visually, the film offers a powerful narrative which effectively showcases the juxtaposition of old and new. The visual component of the film is effectively supported by a poetic monologue by the filmmaker which discusses the benefits of modernisation and sympathetically analyses those that hold the burden of it.

A historic residential district within the ancient Seoul city walls, Gyonam-dong embodies South Korea's transformation from the pre-Japanese Occupation era to the modern democratization. The Urban Suite serves as a meditation on the passage of time and its effects on people and places, as experienced by a foreign photographer.

Born in 1982 in Indiana, US, Forest Ian Etsler first came to South Korea in 2005 as a Fulbright Grantee. After several years of teaching English and studying the Korean language, he has turned his focus to film. In August 2016, he got an MFA in film directing at Dongguk University in Seoul as part of the Korean Government Scholarship Program. He also worked as director of East-Asia programming for the Middle Coast Film Festival in Bloomington, Indiana (USA). In 2020, his short film Painter & Mom was selected in the Korean Competition at the 37th Busan International Short Film Festival.

He is a filmmaker, a cinema and photography teacher at Dongseo University in Busan, a programmer for Busan International Short Film Festival, and a board member of the Short Film Conference. He graduated from the E.S.E.C. film school and from University Paris 1 Pantheon Sorbonne. His latest work as filmmaker include One-minded (2014), Tetsu Kono’s crazy routine (2016), The Troubled Troubadour (2016) and The Audience Never Performs (2021).