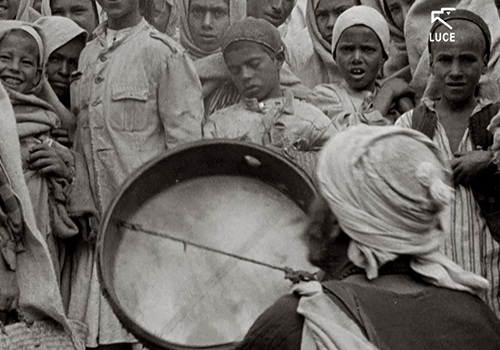 1910s. Poems with alternate rhymes narrate a journey by sea and by rail. These are the verses of Fadil Hasin Ash-Shalmani who witness a historical fact often forgotten: the deportation of numerous civilians during the first years of the Italian occupation in Libya. The short film follows the poet's experiences and memories using only archive footage, thus subverting the original propaganda function of the images.

He obtained a degree (Hons) from the Milan Polytechnic in Communication Design, after which he began a course at the Civic School Luchino Visconti in Documentary Filmmaking. During this course, he had the opportunity to co-direct the documentary short film Cast Iron Days (2018).
Since 2019 he has been studying video editing at the Experimental Center of Cinematography in Rome. In 2020 he approaches found-footage cinema by making the short film Fathers' Land (2021)