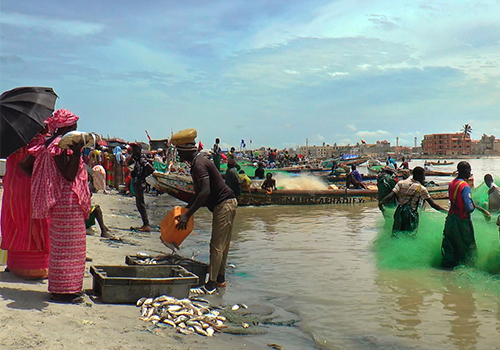 Saint-Louis on the move

Motivation of the jury:
Lyrical and engaging experience of many public spaces and public life. The film explores space through movement and dance and highlights where a community comes together while showing the in-between spaces. Wonderful performance and tempo, with two featured dancers from the Senegalese contemporary dance company Diagn’art.

The result of a collaboration between the Senegalese contemporary dance company Diagn'art and the Belgian and Swiss artists Kita Bauchet and Stéphanie Pfister, "Saint-Louis on the move" presents a subjective sketch of the city and the rythme of its daily life.
An exploration of Saint-Louis through several choreographies performed by 2 dancers and 2 cameras, on Siegfried Canto’s music that highlight the cities energy and the fierce creativity of its youth.

A graduate of INSAS, Kita Bauchet is a Belgian filmmaker. After several short fiction films, Violette et Framboise, Le temps d'un soufflé, Violette au Travail, in 2009 she directed La Fabrique de Panique, a feature-length documentary on the Belgian animated film "Panique au village" by Vincent Patar and Stéphane Aubier, will follow in 2016 Une vie contre l'oubli on the work of director André Dartevelle. In 2018, she created Bains Publics, which opened the doors to the "Bains du Centre" in the heart of a popular district of Brussels. The film received the France Télévisions prize for best documentary at the International Festival of Women's Films in Créteil as well as at the Brussels in Love festival and a special mention from the jury at the "Signes de vie Clermont-Ferrand" festival.