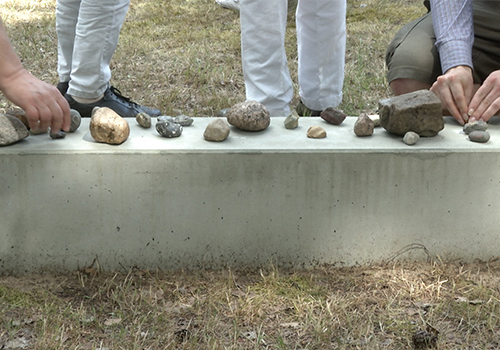 Former street children want to make a difference.
Together with a social worker, an architect and a historian, they plan a symbolic grave on the memorial site for a Nazi extermination camp in Brandenburg.
The film observes conversations and interactions between the young residents and the experts. From practical research on the history of the location and on the meaning of spaces, forms, gestures, the young people create something new: an extension of the memorial site. Thus, they define their own way of commemoration.
The film shows how young people practice participation.
Produced as part of the youth program of FILM WITHOUT BORDERS e.V.

They are artists and authors of experimental and documentary films. They have been working together since 2003, both as a team and in individual projects.
Faroqhi is also an author of graphic novels.
As a team, they create films, design exhibitions, and are interested in participatory forms of creation.
Frequent recurring themes are life in big cities, migration, and lifelong learning. Their works are being presented worldwide at film festivals, cultural institutions and exhibitions.
Faroqhi and Peretz teach video at the Hochschule für Musik "Hanns Eisler" Berlin.