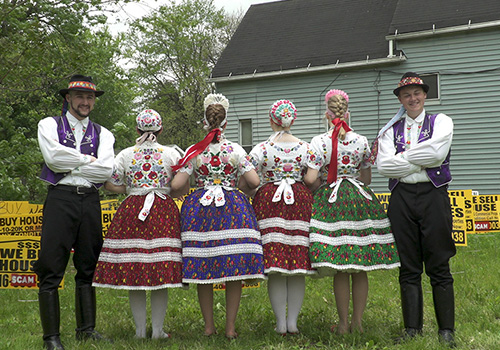 MOTIVAZIONI DELLA GIURIA
This short documentary tells the story of a site-specific community art project in Cleveland Slavic Village Neighbourhood. It makes us see how art and creativity can transform blighted houses, slated for demolition, into temporary art installations and new spaces for collectivity. The documentary centres on the revitalization of abandoned urban settlements through art and in doing so it explores themes of decay, death and urban resilience. Spaces are given a new meaning and they are relived with new human stories.

SINOSSI:
Pretty Vacant is a short documentary, which captures the story of a site-specific community art project in the in Cleveland, OH, during which abandoned and blighted houses slated for demolition are transformed into temporary art installations. Each year thousands of people visit these installations, which were once cherished family homes, then abandoned and left to decay. Before they are demolished, three curators and a large team of artists turn the old kitchens, bathrooms and bedrooms into art you can walk into. It is a funeral in a way, for these homes about to be demolished. This project tells the story of this transformation, exploring themes of decay, death, rebirth and resilience in the context of neighborhood revitalization through art.