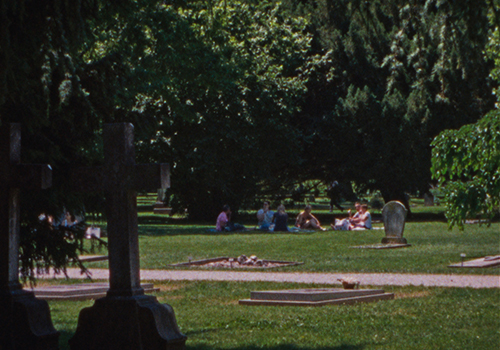 Noon in the cemetery

A luncheon on the grass among the tombs.
While the living are living, the voices of the dead are floating in the air.

When lunch-time comes, the "Cimetière des Rois" ("Cemetery of Kings"), downtown Geneva, fills up with residents, workers, employees, students of the neighborhood. People come alone, in pairs, with friends or colleagues, to have a snack on the grass or to take a break on a bench. The living and the dead share a same space-time. Mixing contemporary Super 8 footage of people in the cemetery and sound archives of personalities buried there, MIDI DANS LE CIMETIERE (NOON IN THE CEMETERY) is a short essay film, a kind of experimental documentary.
If it was a painting, it could be a Vanitas, "a symbolic work of art showing the transience of life, the futility of pleasure, and the certainty of death".

Benjamin Poumey studied filmmaking and theatre at University of Bordeaux III, while working with various theatrical companies.
In 2001 he starts working for Quo Vadis Cinéma in Paris, where he makes his first steps in film production. Settled in Geneva, in 2006 he starts working with C-Side Productions (then still known as Perceuse Productions Image), a company created in the 90’s by artists emerging from the alternative scene.
With an inclination for Cinéma Direct, Essay forms and bold experiments, he develops and produces documentaries selected (and sometimes even awarded) at festivals worldwide, like the Sao Paulo Mostra, the Berlinale, CPH:DOX, Sheffield Doc Fest, Locarno, FIDBA, etc., released in theatres and broadcasted on TV and streaming platforms.
In between projects as a producer, he likes to conduct personal experiments with Super 8 film, such as the shorts Noon in the cemetery and Interzone or the music video Escape for Swiss pianist Léo Tardin.