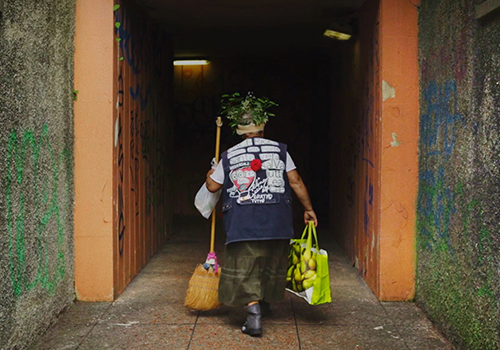 All alone and with an extraordinary amount of willpower, Melina has chosen to undertake a journey into the unknown, sacrificing her own family to defend Holy Mother Earth. The rubbish that has invaded every corner of this world expresses and confirms humanity's actions against nature. Melina's mission is a demiurgic effort to restore light into people's hearts and to physically reinstate order within the disorder of the everyday. This documentary depicts the humble and silent work of a woman who has given her life for her fellow beings.

David Valolao (Chiavari, 28/12/1989) graduated in Graphics and Design from the Academy of Fine Arts in Genoa. He discovered his passion for storytelling and filmmaking at the age of twenty. His first short film was “Exit”, a thriller. In 2015 he received the Tim Vision Web Film Award from Oscar-winner Gabriele Salvatores, for his short film “L’anima nascosta” (The Hidden Soul). In 2017 he wrote and directed the award-winning “Una partita ai confini del mondo” (A Match at the Ends of the Earth), publishing the screenplay with Edizioni Progetto Cultura. That same year he began a degree in Philosophy. In 2020 he directs the short documentary “Melina” simultaneously writing a biography about the life and work of this daring woman yet to be discovered.