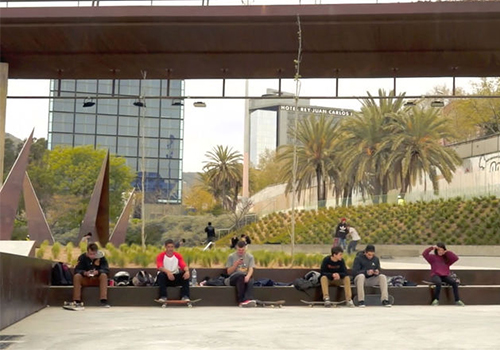 An old skating area by the beach, a forgotten garden buried under bridges and the reconstruction of a skate park in a working-class neighborhood, define the scene of the documentary "Landskating Barcelona". A parallel narration of the building process of three new public spaces in Barcelona explains how certain marginal areas of the city have been naturally integrated in the urban network, taking into account the landscape, its memories, its people, its everyday life...
The Landskating documentary, directed by Kike Barberá, written by Oscar Blasco, Sergi Carulla and Kike Barberá, and produced by SCOB, was shot between 2013 and 2015. During this period, citizen participation processes were carried out, conducted by youngsters themselves, as well as the construction of the first three urban sports parks in the city of Barcelona – the Landskate Parks.
The Landskate Parks have received numerous awards, among which the IOC/IAKS prize, the most important international architecture award for sports, recreational and leisure facilities, under the auspices of the International Olympic Committee.
The Landskating documentary has been selected in several film and architecture festivals, and has been screened in more than 15 cities across Europe and Latin America.

Kike Barberá Peregrina has a long career as screenwriter and documentary filmmaker. He has worked as screenwriter in Globo Media (“7 Vidas”, “Aida”, Ondas Award), in El Terrat Production Company (Homo Zapping) and in Media Pro (“Soon & Moon”, by Manuel Huerga, candidate for Goya Awards for best screenplay). SCOB is an architecture and landscape studio from Barcelona, led by Sergi Carulla and Oscar Blasco. Some time ago they began to produce a series of short documentaries to understand the link between places (landscapes) they encounter and the people who experience them. Landskating is their first short film.