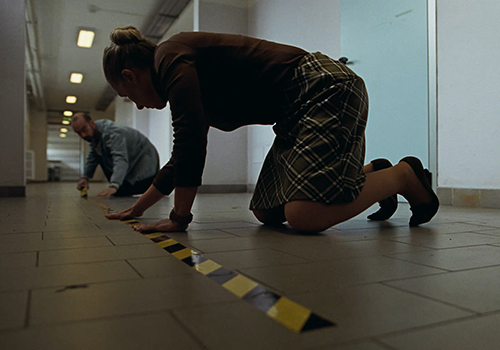 A principal and teacher conspire to protect their students from an invisible predator lurking inside their school. Based on a true story.

Andrea Brusa and Marco Scotuzzi co-directed the short films Respiro, shortlisted at the Nastri d'Argento 2017, and Magic Alps, presented in competition at Clermont-Ferrand Int. Short Film Festival and selected in over 100 international festivals, reaching the nomination at David di Donatello Awards 2019 as Best Short Film, and their latest film, Il Muro Bianco (The white wall), produced by Andrea Italia and Rai Cinema, in competition at Clermont- Ferrand and IndyShorts.

Andrea Brusa graduated in Screenwriting from the University of California, Los Angeles (UCLA). Among the projects that he wrote: Viola/Franca, presented at the Tribeca Film Festival and nominated for the David di Donatello Awards 2017, Labor, in competition at Alice nella città 2018. With the script Il volo della vespa he won the Alfred P. Sloan Foundation Screenwriting Award in the United States.

Marco Scotuzzi is a partner director of the advertising production company Device, a member of AIR3, the Italian Directors Association, a programmer at Orvieto Cinema Fest and a film acting teacher at the Dedalo Teatro school in Milan.