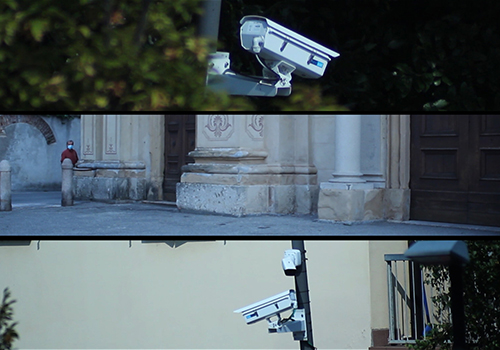 Hecate, Today is an investigation into visual anthropology and transformations of the imaginary, carried out by observing the urban landscape of Vimercate, a small town in Lombardy, Italy, and comparing the pervasive control of the territory by modern surveillance and satellite tracking systems with the function of ancient divinities responsible for protecting travellers, such as Hecate, who gives the work its title.

Salvatore Insana attended the University of Roma Tre concluding his studies in 2010 with a paper on the concept of Useless.
With Elisa Turco Liveri, actress and performer he has created in 2011 the collective Dehors/Audela, producing video-theatrical works, audio-visual projects, site specific installations and photographic investigation, experimental workshops.
He continued his research in motion pictures, photography and other media forms, interested in moving bodies in their elusiveness, in their metamorphic and tragic ability to elude us, interested to probe deeper on the limits of vision, on the "visual spectra", and collaborating with several sound artists, composers and theatre companies, and his works has been screened at several institutions and festivals around the world.