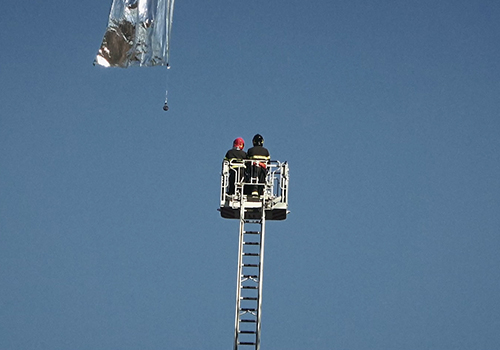 A new skyscraper stands out against the sky amidst massive mirrored buildings and vertical forests, symbols of Milan’s new skyline. Alone, one man bravely scales the building, defying the concrete and glass bastions of new world finance. His act of civil disobedience at 500 feet in the sky makes people look up for a few hours and reflect on the meaning of the expression “stay human”.

Stefano De Felici (1981), graduated in film directing and multimedia production, specialized at the Fondazione Milano in film directing and tools of digital culture and at the Politecnico di Milano in multimedia and interactivity. He made his film debut with the short documentary "Cemento all’indice" selected at the Ischia Film Festival in 2008, a situationist gesture starring Carlo Freccero and Tatti Sanguineti. In 2009 he spoke about the Italian social and economic crisis with 2Caccia Grossa”, a documentary co-produced by AAMOD thanks to the support of Mimmo Calopresti, selected at the London International Documentary Festival. With “Non siamo scarti” in 2012 he received the star of social merit from the mayor of Milan Giuliano Pisapia and won the festival Pillole d’attualità al Festival Isola del Cinema di Roma with which he obtained a distribution and was broadcast by Rai. In 2018 his short film “Ferruccio story of a (little) robot” participated among other festivals in the official selection at the Newport Beach Film Festival and the Festival Europeen du Film Court de Brest. “Gioja22” (2020) is his latest documentary.