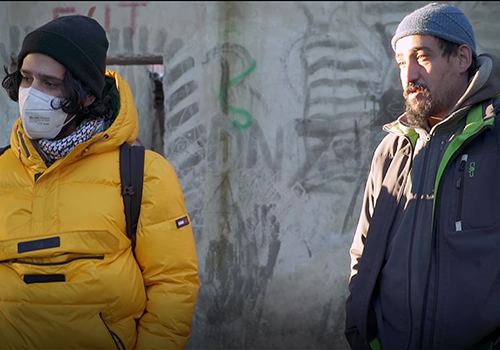 Motivation of the jury:
An emotional journey into the condition of migrants and refugees on the Bosnian-Croatian border of the European Union. It powerfully depicts the aspiration for a better life coming from the voices of displaced individuals and communities, living in extreme poverty in derelict buildings and desperately searching for hope. The sense of helplessness is opposed to the privilege granted to the protagonist Omar, a Syrian refugee now living in Germany.

5 years after fleeing Syria, Protagonist Omar drives part of the way back and visits a place on the Bosnian-Croatian border where - on the external border of the EU - thousands of migrants and refugees are stranded. Most of them live in derelict buildings or the forest. The border is closed to them, and when they try to enter the EU they are usually picked up by the Croatian border police and brought back. There are reports of mistreatment and destroyed cell phones.
A film about deep understanding, a shared experience of searching for a better life while feeling privileged for being successful where as his fellows are not.
The film mixes Omar's impressions and encounters with a personal commentary and videos of Omar's own escape in 2015 via the Balkan route to Germany.

Paul is born in Berlin, after he finished highschool he studied Urban Planning for a year. He soon realized that he wants to study Anthropology and started making documentaries on his own. He now works as a free author and director for public broadcasters in Germany.

Omar is born in Syria, when he was about to finish his highschool the civilwar got worse and he fled the country to turkey. After spending a few weeks there he continued his journey to Germany. He now lives in Mannheim, finished his Studies in Media and Communication and will stard his journalistic traineeship at Deutsche Welle – a german broadcaster which is working international.