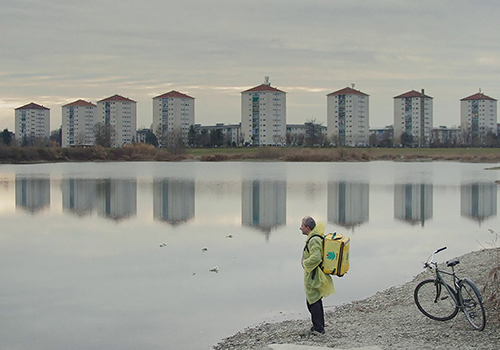 Motivation of the jury:
Fiori (Flowers) is a human-centered portrait of the current transformation, and increase, of delivery services among all cities, The plot succeeds in displaying multiple aspects of a simple delivery man with much sensitivity and empathy. The story offers multiple layers of urban complexity in a clear narrative.

What would Antonio Ricci, the protagonist of Bicycle Thieves, do if he lived in Italy in 2021? Perhaps he would be like Manfredi, a forty-year-old man, unemployed and with no expectations, whose only chance is to become a rider. But to become a rider he needs a bicycle.

He studied Architecture at the Polytechnic University of Turin and Film Direction at the S.N.C.I in Florence. In 2018 he was co-founder of the Cinestrada film collective. In 2019 he won the national call for directing "Ciak s'illumina" organized by Intesa Sanpaolo, Siae and Mibact in the role of screenwriter and director. In the same year he directed the short film Ruina which was selected in numerous international festivals. His latest short film is Fiori (2021).