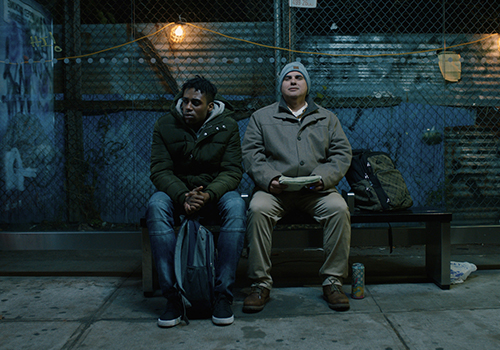 Feeling Through, the first film to star a DeafBlind actor, is a coming of age story that follows Tereek, a teen wandering the streets of New York, desperate for a place to crash when he encounters Artie, a DeafBlind man in need of help getting home. From an awkward meeting between strangers emerges an intimate bond, and a journey that forever changes Tereek.

Doug Roland is an Oscar-nominated director for his film Feeling Through, which is the first film to star a DeafBlind actor. Featured on The Nightly News with Lester Holt, The Daily Show, in The New York Times, and LA Times and winner of over 70 film festival awards, Feeling Through is executive produced by Oscar winner Marlee Matlin and was made in partnership with Helen Keller National Center. As a social impact filmmaker, Doug uses his work to create accessible screening events and speak at conferences, institutions, and schools around the world about collaborative, inclusive storytelling.
Doug’s short film Jada became a viral sensation with over 24 million views on YouTube. Doug produced the feature film Life Hack which won 16 awards on the festival circuit, including Best Independent Feature at the Cleveland International Film Festival. He studied film at the University of Wisconsin Madison and FAMU in Prague.