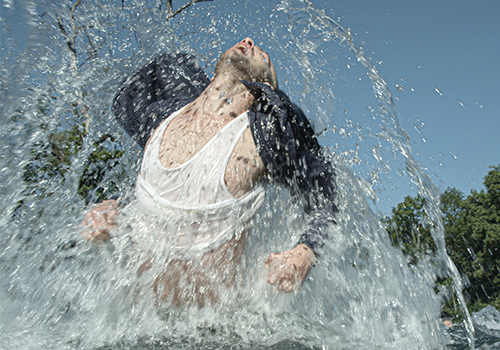 Water - Leonardo da Vinci called it 'the blood of the planet'. A group of people emerges from the water. They try to resist the current of the river and the stream of people in the city, but have to surrender to the flow and are washed ashore.
On the shore, the stranded seek for hold and refuge. In the course of the film ‘against or with the flow', ‘resistance and devotion’ manifest as a primal instinct, as a survival strategy.

Andrea Boll creates dance films (bollwerkfilm), dance pieces for the stage and site-specific formats in public spaces and nature (bollwerk). She is based in Zurich and works internationally as dance film maker, choreographer, dance teacher and is initiator and artistic director of the Swiss dance film festival DANCE ON
SCREEN. She was artistic director, choreographer and dancer from the Hans Hof Ensemble, based in the Netherlands. With this collective and later with bollwerk she created numerous internationally successful pieces and movies and was awarded with several prizes (a.o. the Dutch choreography price, Best of Festival, Dance On Camera, New York and Czech Crystal Prize of Golden Pargue). From 2011 - 2014 she was artistic director of Tanzhaus Zürich and founded Tanzhaus Young. Her newest film DOWNRIVER came out in 2020 and DOWNHILL in 2018, both produced by unico film Zurich and co-produced by CinedansFEST Amsterdam.