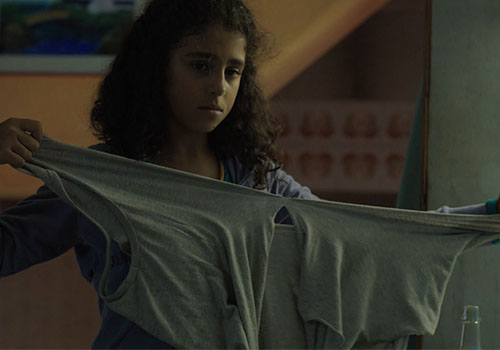 MOTIVAZIONI DELLA GIURIA
Bismillah is a moment in the life of a young girl, Samira, a 10-year-old Tunisian girl, full of anguish and despair caused by her condition as an illegal refugee. Like the song Samira sings (Bismillah, in the name of God, in Arabic) the film is itself a prayer. Bismillah is a story of hardship and solidarity among people and about becoming adult too soon.

Samira, a 10-year-old Tunisian girl, lives illegally with her teenage brother and father in Italy. One night she finds herself alone facing a huge problem, one that might be too big for her to
handle.

Alessandro Grande, born in Catanzaro in 1983, is an Italian director and screenwriter who is always close to social issues. Graduated in History, Science and Techniques of Performing Arts, in 2010 he made In my prison, short film that got over 100 selections in the world and 40 awards, including the Amnesty International Award and the Fandango Award. In 2013 he made Margerita with Moni Ovadia, Francesca Valtorta and a group of non-professionals Roma gypsies. The short film, which deals with the delicate issue of integration, was presented at Giffoni Film Festival and entered the final five of the Nastri d'Argento, winning 80 awards in the world including Best Film at Ischia Film Festival and Best Director at Cyprus Int. Film
Festival. It is currently broadcast on Studio Universal channel. Alessandro also works as an author for Rai, Mediaset and Sky television programs. His latest short film, Bismillah, is the winner of the David di Donatello Award 2018 for Best Short Film, the most important Italian prize.