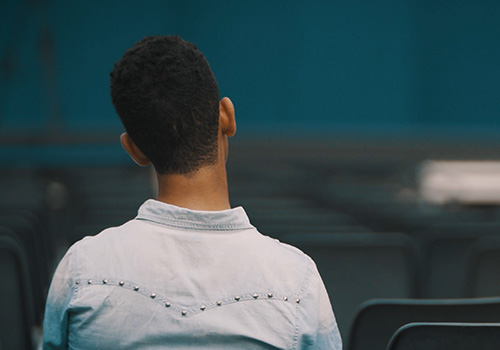 Special session in cooperation with LOOP Festival, as part of the European project A-Place.

Since 2020, LOOP has promoted an open call to commission a video production to investigate the process of creating a sense of place in one of the six cities participating in the project. (Barcelona, Bologna, Brussels, Lisbon, Ljubljana and Nicosia).

The purpose of this call is to invite multidisciplinary artists to explore and widen the meaning of place in our multicultural, interconnected societies. The aim is to produce a video that presents, documents, deconstructs, expands, speculates, challenges, fictionalizes, etc. the experience of creating places. The production of the video is an activity that is carried out within the social dynamics of urban space with the aim of developing a sense of place that overcomes any existing physical, social or cultural inertia.

Presentation of the two films co-produced by LOOP Festival, as an outcome of the open call:

SCREENING of La città dentro
TALK with Anna de Manincor and ZimmerFrei Collective with the participation of Filmon Yemane and Bana Abreham.

La Carpa aims to investigate the process of construction, use and disappearance of a removable theater installed at the end of the sixties in l’Hospitalet de Llobregat, the work of the Murcian architect Emilio Pérez Piñero. This research is based on the account of direct testimonies: neighbors, city council workers and relatives of the architect. Being temporary and ephemeral, many of Emilio Pérez Piñero’s works only survive in memory, like a ghost, but the case of La carpa is special because its current whereabouts are unknown.

La città dentro (The City Within)
Filmon has lived in Bologna for half of his life, studying political science, playing baseball in a team of visually impaired athletes, and moving around the city’s arcades, squares and historic buildings with ease. Filmon does not think of the city as a map seen from above, his city expands from under his feet, widens like a star, always passing through the same points, unwinding in the smallest details of an endless ribbon, a maze of possible pathways recognized by touch and hearing. The urban tangle is domesticated by the physical action of walking, one day with a snappy body and another with a tired body, sitting on the fresh stones of the Public Library in the summer heat, locating a scent of warm lard in the still air of the autumn gouache or following the pungent smell of the detergent that dries along the streets in the spring breeze.