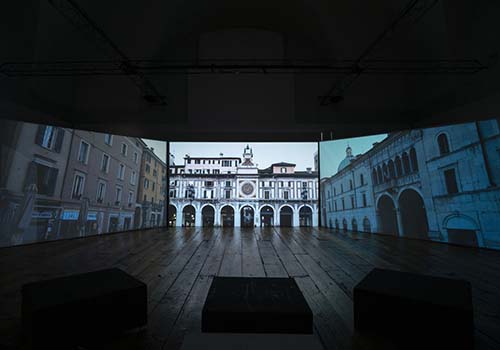 What Makes Us Weaker, Makes Us Closer

In the popular district of Carmine in Brescia, in the months following the most acute phase of the pandemic, a group of citizens begins an action of solidarity for food distribution called “Food for All”. For over a year, “Food for All” manages to collect resources and basic necessities for about 1500 people a week.
The film was designed for a video installation on three screens of three meters, within a homonymous multimedia exhibition in space C.AR.M.E., inaugurated behind closed doors on the eve of the second lock-down. The exhibition has been fully disseminated on-line and has managed to give impetus and visibility to the action of popular solidarity, with the exhibition set up within the spaces of CARME art centre but not open to the public.
The exhibition ended in early January, “Food for All” continues its action in the neighbourhood during 2021.

Nicola Zambelli graduated in Hermeneutics Philosophy with a thesis on the narrative identity of the Self, in a comparison between philosophy, photography and documentary.
Filmmaker and author of documentaries, photo reportage, installations and videos for theatre, dance and art. The feature films he worked on were screened in Italy and abroad, receiving several awards at festivals. He is responsible for directing and directing photography.
Among the founders of the production company SMK Factory and the cultural association SMK Videofactory, creators of the independent film distribution portal Openddb.it based on the idea of open culture, according to the guidelines of the open-source.
He has many collaborations with production companies in Italy and abroad, theatres, public institutions, companies or institutions such as: Piccolo Teatro di Milano, Fondazione Brescia Musei, Teatro della Cooperativa, Residenza Idra, C.L.A.P.Spettacolodalvivo, Max Planck Institute, Musil, Maffi Foundation, Koelliker/Mitsubishi and others.
He conducts educational projects in schools with which in 2019 he wins the first prize and a special mention at the "International audiovisual awards" in the days of the 76th Venice International Film Festival.
In May 2020 he won a special mention at the "EVA - excellence in visual anthropology awards" awarded by Ethnocineca of Vienna for the film "Cracks".
His latest documentary film “Sarura - the future is an unknown place” (scheduled to be released in 2021) was selected in 2020 at the “Impact days” of the FIFDH Human Rights Festival in Geneva and at the “Industry Days” of the Milan Festival “Visions from the World”.