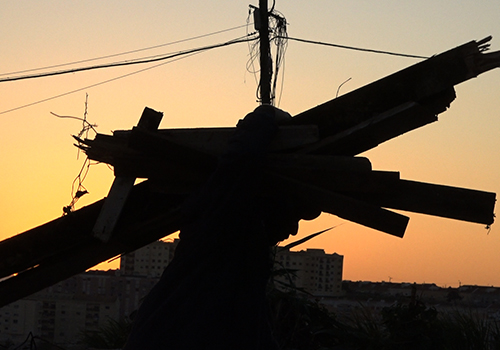 Their Land, Our Home

Motivation of the jury:
A story of displacement in the informal settlement of Santa Filomena in Lisbon. The search for a place to inhabit is the condition of vulnerable communities found themselves homeless, with cranes destroying their memories and erasing their identity. The human attachment to the land is opposed to the process of urban renewal of the real estate market.

Weaving legend and reality, Their Land, Our Home is a snapshot of the final days of Santa Filomena, an informal neighbourhood in Lisbon where migrants from Cape Verde, Angola and rural Portugal have lived since the 1960's. The film gives voice to those whose homes are being destroyed through the government's dated and uncaring slum clearance program. Through their stories we see that what is being lost are not just houses but a community, an identity and feeling of belonging. These are things that, once destroyed, are not easily rebuilt.

He is a video artist and documentary filmmaker whose work explores the politics of space and the interplay between human action and the natural world. Ryan works with different techniques including observational landscape cinema, sound and video collage and oral history documentation as ways of exploring the emotional and material links that tie people with the landscapes and spaces they occupy.