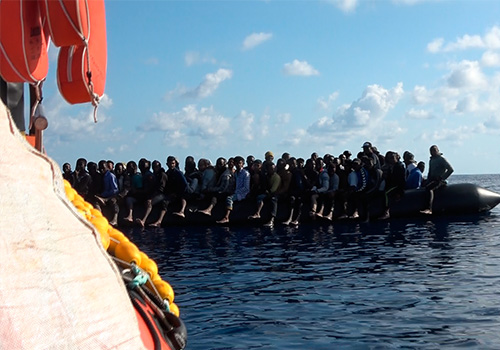 The Mediterranean : The Refugee Graveyard

Since the end of February and the announcement that Turkey will open its borders with the European Union, thousands of refugees have been attempting to reach the island of Lesbos, Greece, everyday. A new humanitarian crisis that is only exacerbating the struggle facing the thousands of men, women and children who are fleeing Libya.

In this war-stricken country tens of thousands of migrants are the victims of a government that tortures and enslaves them. In order to reach Europe many of them are prepared to risk their lives and take their chances at sea. Over the course of the last six years almost 16,000 people have died or have gone missing off the Libyan coast. A crossing made all the more perilous since the coastal rescue operations were restricted to the Libyan authorities with the silent agreement of the Europeans.

In order to combat this tragedy humanitarian organisations specialising in rescue aid have taken to the sea or the skies to patrol the area. Accused of aiding illegal immigration in Europe, these NGOs are the target of numerous administrative and judicial claims that attempt to derail their mission. We followed them for several weeks on board the Mediterranean emergency rescue ship ‘The Ocean Viking’ and in the air off the coast of Colibri.

We also investigated the two shores of the Mediterranean. In Libya we were able to get access to Zawiyah, one of the most feared detention centres in the country. Torture and rape is the norm there. Migrants are prepared to flee this barbarous treatment at all costs.

Jean-Baptiste Renaud, 33, is an investigative journalist and director of investigative documentaries. Since 2010 he has directed or co-directed a dozen feature-length documentary investigations. After being an editor at Premiere Lignes and Crash Investigation for 7 years, he continues to defend investigative documentaries in the world of TV broadcasting.
Renaud is part of the 84th cohort of ESJ Lille where he has also led investigative training sessions for first and second year students since 2017.
For the theme of his works, he has often chosen to investigate the violation of human rights during periods of armed conflict, and, more specifically, the complacency, or even complicitness, of Western democracies in these acts of violence.

Etienne Huver, 44, is a successful independent reporter. Since 2014 he has been one of the leaders of the group of investigative journalists, ‘Slugnews’.
As a graduate of the Institut de Journalisme de Bordeaux Aquitaine (IJBA), he has worked as a reporter for the radio channel RTL for 13 years. Most notably, he covered the 9/11 attacks in America and the beginning of the Iraq war in 2003. Since then he has collaborated with different names in press and television, such as Arte, M6, France télévision, and France 24.
Etienne Huver is a Prix Albert Londres 2016 laureat for his documentary ‘Disparus: la guerre invisible de Syrie’, co-directed with Sophie Nivelle-Cardinale.