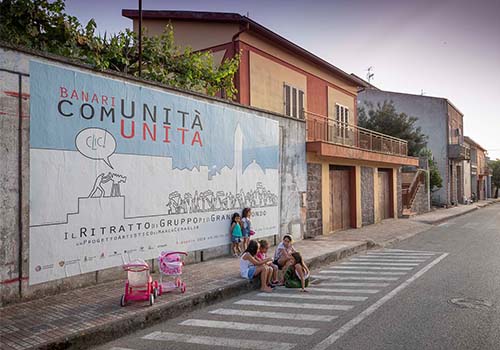 The Largest Group Portrait In The World

Our “The Largest Group Portrait in the World” event-performance took place on August 4th, 2018 in Banari – a very small village in the province of Sassari (Sardinia, Italy).
We at Ordinari Mai Cultural Association would like to bring it to your attention because we do believe we can apply for a Guinness World Record.
One of Sardinia’s main problems is depopulation: the proportion of seniors grows as the proportions of working age adults shrink. What is more, the unemployment rate continues to grow, the economy is stuck and consequently youngsters often look for work in other countries. We asked people in Banari to help us face this serious matter, showing that they were still there against all odds, hoping and fighting for their future and trying to avoid the loss of their own roots. But how did we do it? We strongly think that Art is the solution: we asked them to pose for one of the largest group portraits ever. All residents should be directly involved in the performance because it was (and still is) quite obvious that strength only lies in unity. With the help of the Municipality of Banari, we knocked every door and explained our project; we delivered a countdown calendar and set lots of meetings too. It took a whole year but it had been incredibly worthwhile for the community.
On Saturday 4th, when we finally shot the portrait, in the bleachers we built (L 27m x W 5mt x H 7mt) there were 505 residents (with an August 2018 population of 570) standing up proudly, from the youngest to the oldest (97 years old). We took two pictures: a standard group portrait (where participants’ faces can be easily recognized) and a more artistic one (in which their faces are covered with numbers printed on paper sheets to protest against this inevitable depersonalization process).
This venture by Ordinari Mai has had great success and received a great deal of media attention. Residents have immediately understood the importance of it because we are of the opinion that it will raise awareness among the local or national authorities so that they pay greater attention to the problem.
These events are a demonstration of how important it is for us to be united and make some noise in an artistic way. 505 people, an entire community, were brought together by a common goal: pride, trust, attachment to one's own roots, those aren’t just words but a powerful solution – it is a huge commitment, probably the biggest any of us will experience. And it’s just the beginning.