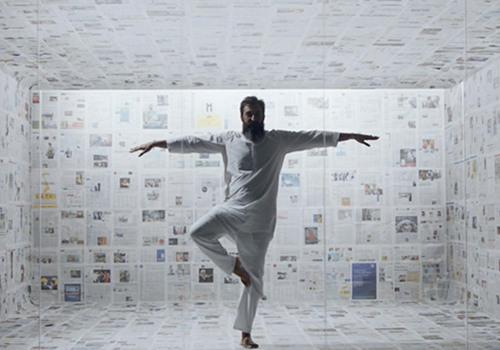 Visioni Urbane 2021
ART AS AN AGENT OF CHANGE

Short film produced during the MACRO ASILO’s Atelier in which Michele Giangrande participated from July 30 to August 4, 2019. In this occasion the artist created a metamorphic, experiential and performative installation that involved the entire museum audience.
Human zoos, also called ethnological exhibitions, were public displaying of human beings during the 19th and 20th centuries, usually in a so-called natural or primitive state.
Ethnological exhibitions have been criticized as highly degrading and racist.
We live in a society where we are always under observation and judgment, at the mercy of the people of the network and all this by choice.
No one forces us, on the other hand, we choose to "share" and let everyone know what we eat, what we drink, what we live, what we love.
A continuous and inexorable stream of private information which becomes public and that is spread in the ocean of online information, but that is there anyway, available to everyone, every day and at any time.
For sure features are not all so negative or dramatic, on the contrary, but what would happen if reality also complies with these dictates, we no longer lived in real time? If in addition to virtual life, ever more important than the real one, even reality was subjected to certain mechanisms of "sharing at all costs" and "obsessive compulsive observation"?
Today this film, in the pandemic era, takes on a sinisterly prophetic aspect.