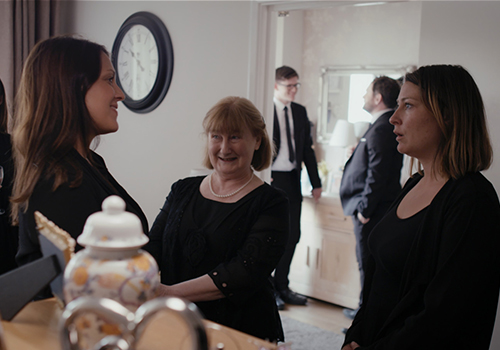 Three adult siblings race around their childhood hometown to decide who gets to release their late mother's ashes.

He is a freelance writer, director, and producer from the South East working in both fiction and non-fiction.
His short film work includes Textual Relationship, a satirical rom-com about a new couple who meet online but refuse to engage with each other IRL (in real life). The film debuted at BFI Future Film Festival was broadcast on London Live and won Best Comedy & Film of the Night at Limelight Film Awards. Follow up, Sticks, won Best Comedy at Horsham Film Festival in 2019 and his latest project, The Deal was nominated for Best Comedy Short at the New Renaissance Film Festival and recently selected for the BIFA-qualifying Short Sighted Cinema.
When not directing, Syd works in production and has been part of the production team for two independent feature films for Lost Eye Entertainment; a Channel 4 comedy blap for Fudge Park Productions; and an independent documentary about micropubs for Pixelform Studios. He has also produced branded content for Confused.com, Hasbro and the NHS.
His producing portfolio also includes a strong slate of award-winning short films that have screened at BAFTA, BIFA and OSCAR qualifying festivals. Most notably, Have We Met Before? was commissioned by the BBC and BFI to celebrate the 30th anniversary of the Internet, and Gypsy’s Kiss was BAFTA longlisted in 2018.
He is currently a member of BFI Network X Bafta Crew and Directors UK.