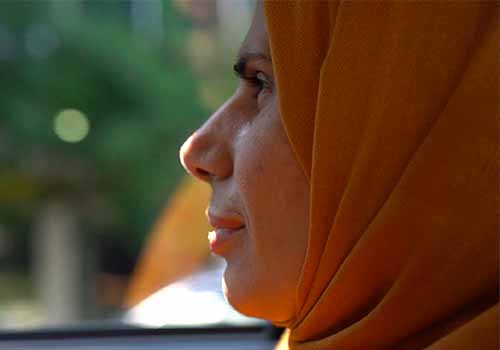 After escaping the devastating war in Syria, Malak seeks refuge in a camp in Beirut, Lebanon. Despite the trauma and misery of raising her own household on her own, she still hasn't given up on her dreams. Embroidery takes on a new toll throughout her life, allowing her to cope with her mental health. Knitting opens a new path for her with a future full of hope. A hobby and career like this makes an artist like her become a strong team leader; encouraging other women in the camp to pursue their careers. Passing on her positivity as an independent woman and role model, she still stands. But will she still be able to stay in charge of her embroidery organisation and lead these desperate women?

Noura Al-Turjman is a Syrian documentary filmmaker with a background in media and communications. She has done her masters in Documentary Film in London. Noura was born and raised in Aleppo, Syria up until 2012 due to the war. She fled to the neighbouring country, Lebanon where her second home is. Her work and interests focus on human activism and wildlife. Noura’s main goal is to use film as a potent tool in spreading awareness about social movements and giving a voice to the voiceless.