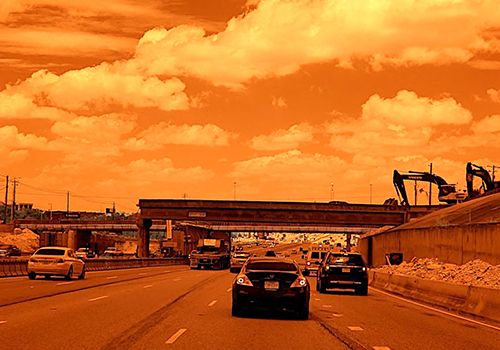 Our film of Jack Cochran's erasure poem, "Scary Places," extracted from "The Geography of Nowhere" by James Howard Kunstler, combines unexpectedly unsettling images of city freeways, urban traffic patterns, and highway construction, rendered extraordinary by using two different cameras, one of whose sensors has been modified for infrared photography, to concretize the current shape of the city using Austin, TX as an exemplar, and makes effective use of Regin Petersen’s 2011 new music composition, “Shapes and Sizes,” performed by the Ensemble Kwartludium (creative commons license), melding music, text, and moving pictures together in a beautiful but alienating critique of late corporate capitalist American car culture and its disregard for the environment worthy of Jean Baudrillard.

Text of the poem:

Pamela Falkenberg is an independent filmmaker who received her PhD from the University of Iowa and taught at Northern Illinois University, St.Mary's College, and the University of Notre Dame. She directed the largest student film society in the US while she was at the University of Iowa, and also ran films series for the Snite Museum of Art in South Bend, IN. Her experimental film with Dan Curry, Open Territory, received an individual filmmaker grant from the National Endowment for the Arts, as well as grants from the Center for New Television and the Indiana Arts Council. OT screened at the Pacific Film Archives, as well at numerous film festivals, including the AFI Video Festival, and was nominated for a regional Emmy. Her other films include museum installations, scholarly/academic hybrid works shown at film conferences, and a documentary commissioned by the Peace Institute at the University of Notre Dame. She is an occasional contributor to Moving Poems Magazine (http://discussion.movingpoems.com/).

Jack Cochran is an independent filmmaker who has produced, directed, or shot a variety of experimental and personal projects. As a DP he has extensive experience shooting commercials, independent features, and documentaries. His varied commercial client list includes BMW, Ford, Nissan, Fujifilm, Iomega, Corum Watches, and Forte Hotels. His features and documentaries have shown at the Sundance, Raindance, Telluride, Tribeca, Edinburgh, Chicago, Houston, and Taos film Festivals, winning several honors. His commercials and documentaries have won Silver Lions from Cannes, a BAFTA (British Academy Award), Peabody Awards, and Cable Aces. Some notable credits: Director of Photography on Brian Griffin's Claustrofoamia, Cinematography for Antony Thomas’ Tank Man, Director/Cinematographer of Viento Nocturno, and Cinematographer of Ramin Niami’s feature film Paris. Jack was trained at the University of Iowa Creative Writers Workshop as well as the University of Iowa film studies program.