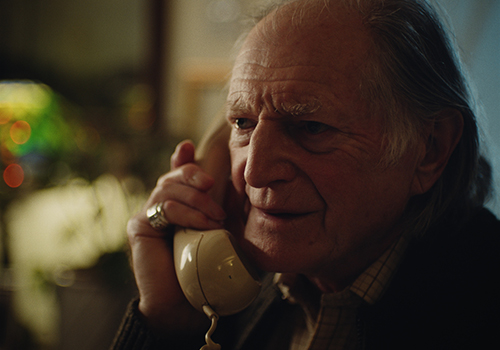 Motivation of the jury:
Roy is about an elderly and lonely British man who finds a platonic relationship over the phone with a woman working at a phone-sex company. The film takes place entirely inside Roy’s house, depicting his sense of loneliness and the need to interact with others, while providing a rich insight into the importance of the ‘home’ space. It is an exceptional film which holds a strong narrative.

When a reclusive widower accidentally calls an adult hotline worker, an unlikely friendship is born.

Hailing from Belfast and Gloucester, filmmaking duo Ross White & Tom Berkeley began collaborating in 2014 after meeting at drama school in London. Having run a successful theatre company together for four years, the pair bonded over a shared interest in playwriting, with their early works nominated for the Kenneth Branagh Award for New Drama Writing, Papatango Prize and the Bruntwood Prize for Playwriting. In 2019, the duo began to work collaboratively, turning their attention to writing for TV & Film, and founding the independent production company Floodlight Pictures as a vehicle through which to develop their work. Their debut short film Roy was designed as a micro-budget project for one actor, the screenplay for which attracted the attention of BAFTA winner David Bradley and Academy Award winning production company Slick Films. Roy went on to screen at over 18 Oscar and BAFTA qualifying festivals internationally.