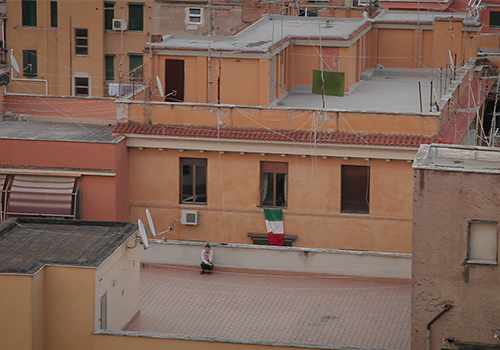 Quarantine mood documents real life scenes during the quarantine in Rome, looking for the beauty and poetry of reality.
I chose to tell the life I saw during the lockdown from my terrace. My eyes tried to capture all that I saw around me, which in the end was also the reflection of what I had inside.

Alessandro Marinelli graduated in Cinema at Rome University of Fine Arts (RUFA). Since 2003, he has been working as a director and editor with shorts, documentaries, feature films and videoclips. With the documentary Pino Masciari, written and directed by him, has won several awards, including the Ilaria Alpi Doc Rai 2014 Prize as best documentary.
In 2018 he presented Basileus at the Giffoni Film Festival in the section GEX - DOC (International Documentary Competition) and DOXA (International Documentary film festival). The film was released in Italian cinemas where it received many praise from the public and critics.
In 2020 with Quarantine Mood won the Audience Award at the Corona Film Festival - The First International Pandemic Self-Isolation Short Film Festival.
Since 2016 he is professor of video editing and documentary at Rome University of Fine Arts (RUFA)