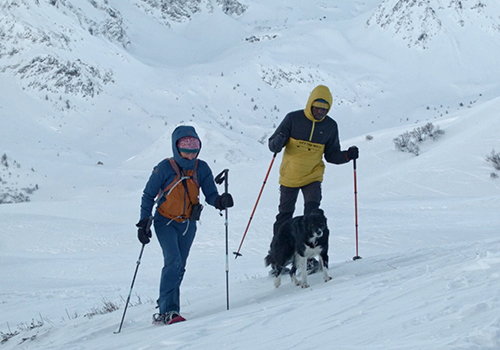 On the Ridges of Solidarity

Justin arrived in France from Cameroun in 2018 by crossing the Alps to Briançon. Rescued by locals, he bonded with these mountains a deep attachment. There he met Rachel, a mountain guide in the region. Together, they explore these peaks, the hopes and fears they arise in them, tell the story of this abrupt border, its violence and its surges of humanity.

Nora is passionate about cinematography, she works as a camera assistant after studying in the image section at INSAS (Institut Supérieur des Arts, Brussels). She works on many other artistic and cinematographic projects. She is very sensitive to the cause of defending the rights of exiled people, and is involved with several associations in Paris where she has accompanied asylum seekers for several years.

Florent works for an NGO and is particularly involved in issues of social justice and access to energy. He made a first film in the form of a travelogue called "Pamirstan". He spends a lot of time in the mountains and particularly in the region on Briançon. In 2017, he is strongly marked by these men and women who find themselves forced to cross the elusive cross-border line between Italy and France materialized by the High Alps, taking enormous risks.