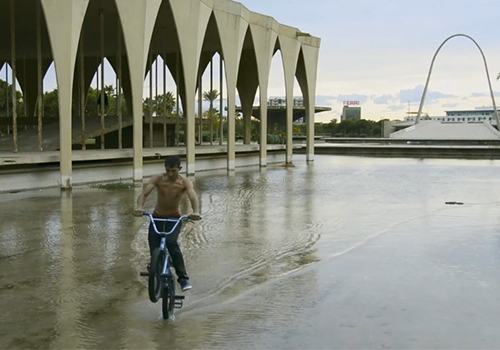 To claim the right to the city in the sense I mean it here is to claim some kind of shaping power over the processes of urbanization, over the ways in which our cities are made and re-made and to do so in a fundamental and radical way. (David Harvey, The Right to the City).

The film explores an unrealized potential of the Rachid Karame International Fair for local residents of Tripoli, Lebanon. Locally called the Maarad (exhibition) it was designed by famous Brazilian architect Oscar Niemeyer in the 1960s. It occupies an area of 1 million m2. The complex was supposed to be ready for the 1975 International Fair. However that same year the civil war started and the space was never finished. Most locals have never ventured inside but some people are arbitrary let in by the guards: tourists, joggers, and dog walkers. There are transgressions and trespasses that happen. Removed metal bar in a fence creates a gap, a blind spot between worlds.
The film focuses on a group of teenage boys entering the space, who ventured inside every Sunday. They used to enter the space illegally through the opening in the surrounding fence or by jumping over the fence. The boys would go to the Maarad to ride BMX bikes or rollerskate, practice gymnastics, and learn tricks with each other. The space became more than this for them: they spent time, hanged around, showed off and practiced other rituals of every-day life inside the Maarad. It became an important part of their individual histories, hopes and dreams. Their energy gave breath of new life to the decaying modernist ruin of Niemeyer's gem, bringing back questions of social meaning of architecture. How did they use the space? What did it mean to them? How were they transforming it? Did it become a place of refuge? Did their ventures inside revitalize the space in subversive way? Can they be seen as transgressions or forms of resistance, even if unconscious? Poetic and reflective rhythm of the film amplifies this meeting between architecture and people, creating contemplative space for the viewer.

Marta Bogdanska is a Polish photographer, visual artist and filmmaker. Lived in Lebanon for 8 years, which became her second home. Holds MA in Philosophy from Warsaw University. Studied Gender Studies, and at Homeworkspace Programme with A. Vidokle & J. Toufic in Beirut. Currently enrolled in School of Seeing at the Institute of Photography Fort and Open Institute at Powszechny Theater in Warsaw. Marta is finishing her diploma at the Academy of Photography in Warsaw, where she is preparing a new project ‘Shifters’. Recently she has been shortlisted for Athens Photo Festival 2019 and was a runner-up to Forecast Platform 2019. Her 'plaintext' project was shown at OBSCURA Festival in 2018 and at TIFF Festival 2019. She just made a short doc film ‘Next Sunday’. Her filmography includes experimental and artistic films: "Who Killed the Wild Pigs?", "Machine Lies", "Youmna Saba. Portrait". She was a DoP for a short doc "Landminds". She was awarded art residencies & grants e.g. Heinrich Boell Foundation grants for Exilium and Mixed Feelings projects, art residencies in Nida Art Colony in Lithuania, Gasworks in London and Botkyrka Konsthal in Stockholm. She was selected for photo workshop with Vanessa Winship at Jednostka gallery; ‘Thinking Books’ with K. Pijarski at FAF; 'Sensibilities, Experiences: Going Beyond the Surface' photography workshop with L. Leblanc (2012); ‘As Long As I'm Walking...’ with F. Alys in Beirut. She took part in Re-Tooling Residencies Programme for Emerging Professionals in Culture organised by CCA Warsaw. Marta exhibited her work in several group exhibitions (e.g. Obscura 2018, Palm Photo Prize 2018, Love Letters to Meem in Station Beirut in 2018, BLICA – First Lebanese International Biennale for Cinema and the Arts in 2017). She created and co-curated an art project "Fenix cities - workshops and exhibitions in Warsaw and in Beirut" in 2009.