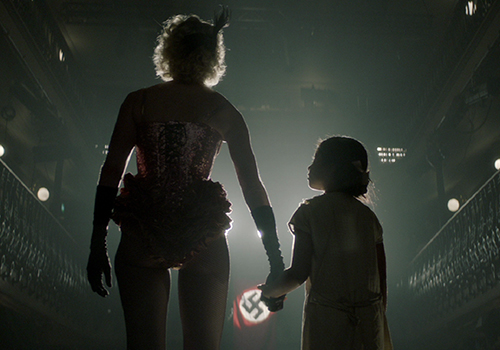 Berlin 1936. Hitler will soon host the Olympics, and the streets are being “cleansed” of Jews and Romani “Gypsies”. A seven-year-old Roma girl, Hélène, hides in an old Weimar Club, concealed by dancer Katharina who plans to escape Nazism and take the girl to America. But Hélène won’t rest: sneaking about, the little mouse sees everything, including the arrival of SS Hauptführer Otto, an awkward army conscript. Clumsily making a pass at Katharina, the officer is inches away from discovering Hélène; decisions have to be made fast and only the child’s ingenuity will save her now.

Former child actor and journalist, David began his career as a director at the BBC – his first drama work as director of landscape photography for Happy Birthday Shakespeare. His first film drama The Goodbye Plane was shortlisted for an Academy Award. Alongside hit American shows such as Locked Up Abroad, Dangerous Persuasions (his episode Highway to Hate winning a CSC Award for Best Cinematography) and Paranormal Witness for SyFy, David has directed the BBC’s prime-time Casualty and written and directed acclaimed dramatizations of The Great Train Robbery, The Assassination of JFK and The Hitler Diaries for the BBC. David also wrote and directed TV feature Trial of the Knights Templar for Channel Five, and was recently lead writer and drama director on Race For The White House for CNN and Netflix.