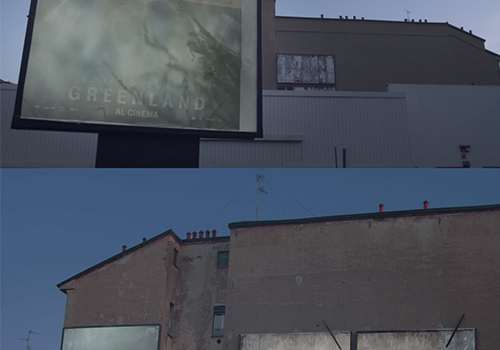 The work has been created for the IAR international video art exhibition at palazzo Fondi in Napoli, and it was filmed and produced at Via Farini - Vir artist in residency in Milano.
The film wishes to investigate a potential contemporary condition of suspension in which western-society has fallen into. The artist by assembling a unique optical device has explored the microscopic dimension of billboard paper and projected it back onto its given urban environments.
The result is an atmospheric work in which the micro confronts the macro in a sequence of urban projections where by means of juxtaposition of perspectives reality results as partially suspended.

Gianmarco Donaggio (b.1991) - director, cinematographer, and artist - is researching in the hybrid space between art and cinema. He is known for his experimental and atmospheric film pieces, which screened in several prestigious international film festivals, including, the Pesaro International film festival of New Cinema, the Asolo Art Film Festival, and the Athens Digital Arts Festival.