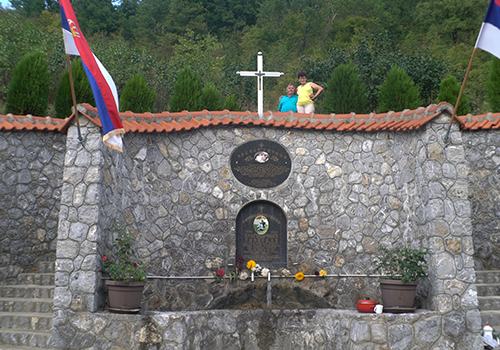 Serbian pensioners Marija and Toma found each other in their 60s but are as smitten as teenagers, so much so that they invented a 15-month anniversary to be able to celebrate their love with their friends. The party takes place on the monument that Toma built to commemorate a great personal loss, drawing on the funds he acquired through years of working abroad. On this special day, the happy couple talks us through the lives and loves that led them here. The film is part of a series exploring aesthetics, architecture and identity among Gastarbeiters (migrant workers) throughout the Balkans.

Wild Pear/Divlja Kruška (Eluned Zoe Aiano, Greta Rauleac, Alesandra Tatić) is an arts organisation centred on visual and media projects inspired by anthropological research in the Balkans and Southern Europe. Its first short was the experimental documentary I Have a Song to Sing You, which was commissioned as part of the London Short Film Festival’s “With Teeth” programme. Other works include the visual installation “Skywalker”, produced for the Digital Diasporas exhibition at Centrala, Birmingham and Studio 44, Stockholm. Flotacija, their first feature documentary, is currently in post-production.