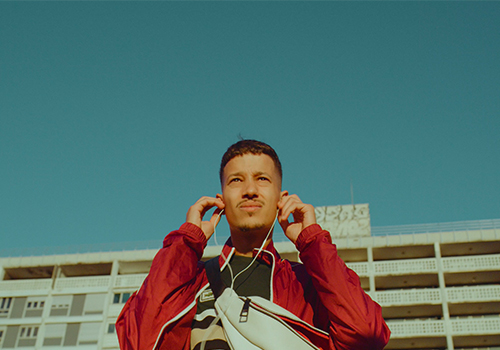 Motivation of the jury:
A striking portrait of the aspirations of a young guy living in the suburbs, obsessed by sex and social media, and searching for personal success. It is a vivid story of solitude and incapability of finding a proper space in the society, trapped in an overpowering social and urban decay.

Adil, 20, has a date with a girl tonight in the downtown. Time to show everybody on social media, especially Sabri, his best and only friend, that he can seduce.

A french director of photography from Lyon. Graduated from ARFIS in 2010, he’s using his talent behind camera in commercials, videoclips, and fiction since then. Drawing on his experience in short films, he signs the image of a first long feature film in 2019 Soula, awarded at the 77th Mostra de Venice (Final cut category).
After over a decade and a hundred commercials, he tries himself directing music videos and shorts for a few years besides DP’ing and direct in 2021 two shorts (Magma and Mirage) currently browsing festivals.