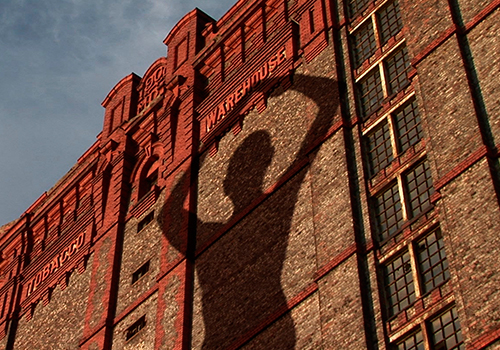 Left Behind is an emotional portrait of Liverpool's famous Tobacco Warehouse (1901); a grade II listed building that is considered being the largest brick building in the world. Today, the industrial warehouse lies empty in a vast and abandoned dock landscape.
The expressive space portrayed in the film is inhabited by an enigmatic figure that, in terms of its scale and appearance, seems to live in a symbiosis with the building and its site.
Left Behind offers a mysterious "vision" of a warehouse that is today a "shadow of itself". The short film circles around the themes of presence/absence, empty landscapes, beauty/grace and, by demonstrating that the site is not as "left behind" as perhaps thought, offers a hopeful glimpse into the future of its development.

Monika Koeck is a professionally trained architect, dancer and award-winning filmmaker. She is a Cambridge University graduate whose artistic work is shown on festivals and exhibitions world-wide.
Monika Koeck started her career as a professional ballet dancer, before entering the world of architecture and filmmaking. Monika taught architectural design as Visiting Professor in the US and Research Associate in the field of architecture and film at the University of Cambridge. Monika is founding director of the Liverpool-based film/architecture production and post-production company CineTecture Ltd and holds a part-time teaching position at the University of Liverpool.
Monika has a large portfolio of academic, commercial, and art-based moving image productions. In her artistic Oeuvre, her work emphasises the creative use of the ‘body in motion’ as well as the use of ‘space’ and ‘screen space’ as a narrative expressive element. In terms of research, her specialty is the production of films, digital animations and motion graphics that emphasise and illustrate complex themes in an understandable and accessible way to allow for greater impact.