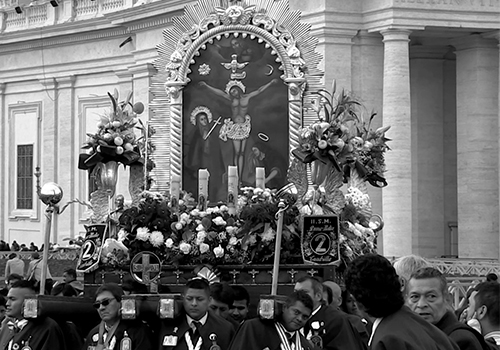 Jörg is one of the many homeless living near the Vatican. But there is something unusual about him: he appears and talks like a sort of holy man, prophesying, among other things, his next reincarnation as Jesus Christ. This transformation will enable him to drastically change the way things are on this Earth.
However, beneath the delusions of omnipotence of a man fighting for glory and universal justice, we find a lonely and pained individual, frightened by the great mystery that awaits all of us.

Alessio Morello was born in Messina in 1995. After moving to Rome, he graduated from the DAMS three-year degree course (Cinema, Television and New Media) of Roma Tre with a score of 110/110 with honors. In 2017 he decides to continue his university course by enrolling in the DAMS Master's course. In the meantime he collaborates with various online newspapers, including Sicilians.it and Artwave.it, writing articles on criticism and film history. He has directed several short films and an advertising spot for the Assicurazioni Generali agency in Messina. He created and artistically directed the film festival "Sentieri d’ombra" in Messina, aimed at the presentation and critical debate of fundamental horror films in the history of the seventh art.

Daniele Ricci was born in Rome in 1994. In 2013, after graduating from high school, he enrolled in the three-year course DAMS (Cinema, Television and New Media) of Roma Tre. He graduated in 2017 with a grade of 110/110 with honors. He decided to continue his studies, enrolling in the DAMS Master's course. Since 2014, he has worked as a freelance videomaker, creating various audiovisual content, including documentaries, short films, commercial videos, etc.
Since 2014, he has worked on various film sets mainly as a production assistant and assistant director. His experience includes working as 3rd assistant direcotr in the film "A casa tutti bene" by Gabriele Muccino, filmed on the island of Ischia.
In 2015 he founded his own production company called "Daniele Ricci Hedgiefilms".