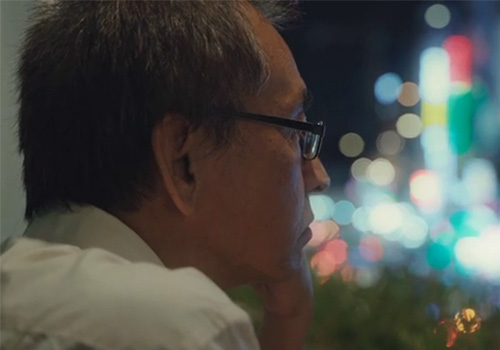 At every opportunity, IT-illiterate Ah Guan takes leisurely walks throughout Singapore’s most crowded streets, holding his cheaply made signboard up for all to see.

FROM MY HEART, HONEST MAN NEED A WIFE.
ANY AGE, LOOK, RACE OK. BUT BACK MUST NICE.
WILL PAMPER YOU LIKE BABY.

For the first time in his life at 57, he is physically hunting for a wife. He believes whole-heartedly that his grounded approach will help him in his search for love. A ‘pretty back’, a peachy posterior.
Through his conquest for companionship, the documentary explores his isolation, loneliness and the motivation for true love.

Chew Yun Yan, inspired by the likes of Hannah Montana, Neil Gaiman and Japanese animation, she has been writing lyrics, poetry and stories ever since she was 9. Having graduated with a Diploma in Visual Communication from Nanyang Polytechnic, to her parent's dismay, she proceeded to graduate from Film BA (Hons) in Lasalle College of the Arts - majoring in Directing, Writing & Production Design.
Other than writing for the course's yearly productions for 2 out of 3 years, she eventually directed a local documentary. Her script for the short film, Happy Lodge, was shortlisted for SGIFF2020. Her first documentary, His Bottom Line, was nominated and screened in Macau, selected for the Top 10 in NYFA2020 and featured on Clermont-Ferrand's Market Picks. His Bottom Line was also featured on local articles from SINDIE, Sinema and Scape's Reeltalk series.
Other than being a film buff, her interests include: conceptual/cosplay photoshoots, set design, graphic design and fashion. She is passionate about writing comedy, horror, reading urban legends/folklore, secondhand fashion and frogs. She barely sleeps.