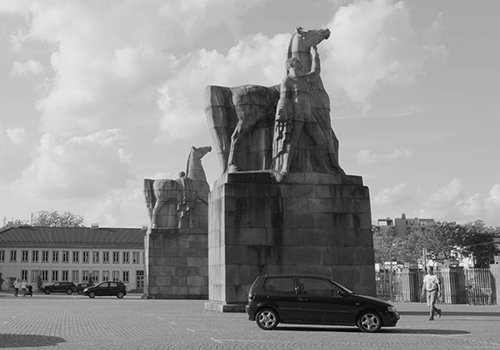 Golzheim depicts the contentious atmosphere in one neighborhood to the north of Dusseldorf. The different architectural structures – the monumental Nordpark (North Park) built by National Socialists, the „white settlement“ Golzheimer-Siedlung with its high-priced one-family homes for the wealthy, the Jewish retirement home and the temporary refugee camp made of containers - are all located side-by-side on a single axis along the Rhine to the north of Dusseldorf. The connecting link is Nordpark, where all the inhabitants of this neighborhood, who live next door to each other yet in different worlds, meet one another.

Born in Kaunas, Lithuania, she is a media artist and filmmaker. The artist lives and creates in Germany. In her projects, the artist deals with social themes, the interaction between the individuals and their environment, as well as sensitive society issues. Naujokaite's installations are multi-layered video and slide projections which involve sound and text, spatial objects. Often the projection screen itself becomes a volumetric object in space, which is „folded“ or cut into separate planes, shifted in space. The media of video and photography are best suited to reveal the reality-based, documentary content of Naujokaite's work – depictions of people and of social or urban spaces.
Naujokaite has presented her artworks internationally at exhibitions, festivals and art venues