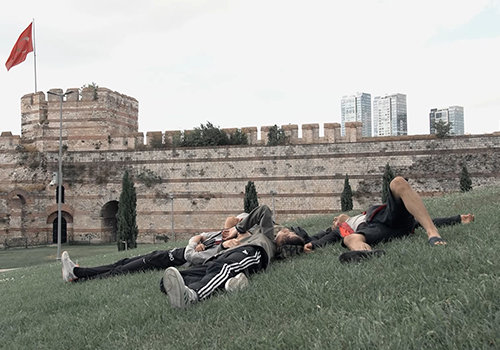 Game Over tells the story of a diverse group of illegal Afghan youngsters, who have been left with no choice, but to leave their homes and families behind, to flee as teenagers to a foreign country. The film follows their life in Zeytinburnu, an Afghan diaspora in Turkey, where they do not speak the language and must live underground, hiding from the police, while working in shady jobs.
In an underground basement, Mo and Ali live with 30 other boys. As the place is crammed, they spend their awakening hours outside moving around the streets and parks of Zeytinburnu, always on the go, to avoid being caught by the police. Left with no one but themselves to look after one another, their incredible strength and yet extreme vulnerability surface side by side in the no-man's land between childhood and adulthood. Fearlessly, they play a dangerous game of destiny over and over again, determined to smuggle themselves into Europe – a utopia far away.
They have all lost so much, they are willing to jeopardize everything to win the dreamy prize of safety and freedom. But at what cost?

She grew up in a globetrotter family, with a dad specializing in sustainable energy solutions for Third World countries. Traveling and hosting people from all national and ethnically backgrounds, has shaped her passion for human narratives and their impact on cultural bridge building. She worked in Norway in the organization RAMP, an NGO for integrating team building and guidance for orphanage refugee minors from Iraq and Afghanistan. It led to an increased interest for a deeper understanding of human life in the MENA region and interest in the Afghan matter. Later on, she learned Arabic and lived in the Middle East.
Since then, she has lived in Taiwan, Lebanon and Turkey and furthermore spend a good deal of her life, traveling the Globe. The last couple of years, she worked as an international television reporter in Istanbul. However, she missed the human faces and in-depth coverage in the news feeds and the more personal story telling. When she came up with the idea for making this documentary film, she left her corporate life to pursue the privilege of being fully in charge of creative decision-making and the production process.
Except for a few courses in film production, she is autodidact in film creation, driven by an interest in visual storytelling and social relations. With a background in Social Anthropology, she has lived and worked with cultural dissemination and film languages in Taiwan, Lebanon and Turkey.