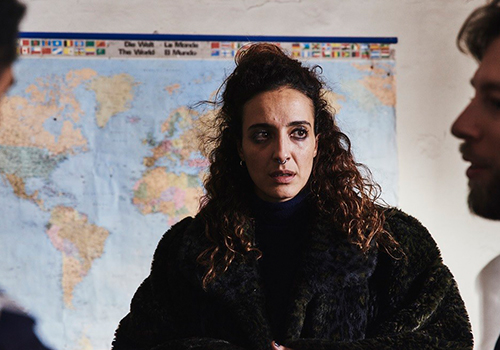 A French girl, daughter of second-generation immigrants, walks into a police station to report her brother Jamil's involvement in the imminent terrorist attacks at the Stade de France and Bataclan, but the policewoman she encounters has an unexpected reaction.

Emanuele Aldrovandi (Reggio Emilia, 1985) is one of the most awarded and represented Italian playwrights. He worked with some of eht most importante italian theaters, like Elfo Puccini, ERT and Teatro Stabile di Torino, and with international theaters like Beijing Opera, LAC Lugano and The Tank Theater New York. His plays have been translated, performed and published in English, German, French, Spanish, Polish, Slovenian, Czech, Catalan and Arabic. He wrote and directed three short movies, presented at many italian and international festivals: The progress (2018) A typical name of a poor child (2019), Bataclan (2020).