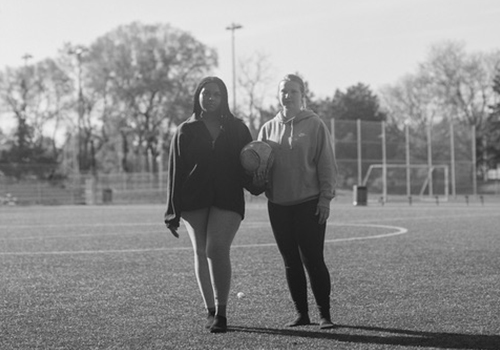 What do teenage girls do when they are not at home or at school? This short film features teenage girls who dare the urban public space, despite the discomforts it generates for them, as young people and women. Since 2018, researchers Nathalie Boucher and Sarah-Maude Cossette have been exploring this ignored relationship that is that of adolescent girls to urban parks. In Pointe-aux-Trembles, an outer neighbourhood of Montréal, Canada, teenage girls enjoy particularly (but not exclusively) socializing, such as chatting with friends at picnic tables. But because these so-called passive activities are considered vulnerable and futile, little is done to support this activity. By giving voice to teenager girls about their activities and the tactics of occupation and interaction that position them as active and experienced users of public space, this short documentary sheds light on their needs in terms of design and equipment, and on their place as engaged citizens.

She founded Respire (Montreal) in 2016 to promote qualitative scientific knowledge on the city. Nathalie holds a master's degree in anthropology from Université Laval, an awarded PhD in urban studies from the Institut national de la recherche scientifique - Centre Urbanisation Culture Société, and has obtained five post-doctoral fellowships on three continents in order to pursue her exploration of public spaces and the social encounters that they hold.

She is a researcher at Respire, where she works on research projets that focus on the use of urban public spaces by minority social groups, such as women, girls and youth. She is also a master's candidate in geography at the Université du Québec à Montréal. As an activist for social and animal justice, she conducts her research projects from an engaged perspective.

She is an independent documentary filmmaker from Montreal. She combines an academic background in geography and environment with practical formations in journalism and documentary filmmaking. She has directed several short films that have been shown in festivals in Quebec and internationally, and her artistic work focuses on citizen power, the socio-ecological transition and the relationship between humans and territories. She is also a filmmaker-mentor for the Wapikoni mobile, as well as a videographer for numerous social and academic organizations, such as Oxfam Québec and INRS